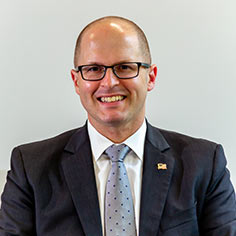 Over the past year, Vision 2020 Fiscal Resources Task Group has published a series of articles detailing various aspects of how our town functions including: Town elections, Town Meeting, Town/School departments and the budgeting process. This week we launch into a series of interviews with Town department and committee leaders which we hope will provide residents with an insight into the people that manage Town/School budgets and departments. We begin our series with Town Manager, Adam Chapdelaine (pictured right).

How long have you been in your current job? I have been the Town Manager since February of 2012, so just over 5 ½ years.

What is the career path that led you to this line of work? I've worked in state and local government since graduating with my B.A. in Political Science in 2011.  I was employed in the Massachusetts State House early in my career and earned my M.B.A. in the evenings at Suffolk University.  I knew early on that I wanted to transition to local government, and I received my first municipal opportunity with the City of Fall River in 2008.  Following that I came to Arlington in 2010 as the Deputy Town Manager and have been Town Manager since 2012.

How do you answer when someone asks what a Town Manager does? I tell them that it’s a bit like being mayor in that it has chief executive responsibilities and authority. However, in the town form of government, it’s not like the mayor because it’s not elected and you share some of the responsibilities with the elected Board of Selectmen. It’s different in that the legislative body is a town meeting and convenes less frequently than a city council or town council. As Town Manager, I have responsibility for overseeing the day-to-day operations of most of the town’s departments as well as being responsible for budget development and management.

Would you rather be Mayor or Town Manager? I like being Town Manager in that there’s a bit of a firewall between me and politics. Of course, I’m not completely removed from politics. I’m attuned to what’s going on in the community and with the Board of Selectmen. However, since I’m not always running for re-election, I can make decisions that might be politically difficult upfront but are better for the town in the long run.

What aspect of your work has the greatest impact on residents? When the work of municipal departments is done correctly, it goes fairly unnoticed. Arlington does a good job with the basics, giving me the freedom to focus on making sure all departments share a culture of making service to the residents of Arlington our top priority. My goal is to develop a team that works well together and is comfortable pointing out areas where we can improve our interactions with each other and the community we serve.

What challenges come with the job? Our biggest overarching challenge is dealing with the structural budget deficit imposed by Proposition 2½. In addition, there is the need to educate residents so that they feel they’re getting good value within the framework of our limited resources. Arlington is very lucky to have many excellent Department heads who do a great job of managing their departments and coming in with reasonable budget proposals. The town is considered a good place to work, in part because of the stability of our funding commitments.

Is Arlington more constrained by its resources than neighboring towns? Yes. There are a couple of ways to look at it. In broad strokes, we are limited by the fact that we are only five and a half square miles and our residential base is nearly built-out, giving us limited opportunities for new residential growth. Neighboring communities have much larger commercial bases. Our commercial base contributes only 5% of our tax revenues. The other budget challenge is meeting the needs of the school department. We are faced with a growing enrollment that is an outgrowth of Arlington’s being such a desirable community in which to live and raise children. In the past, there may have been a feeling that it was the town departments versus the school department, but I think we’ve moved beyond that. People like the schools. They like the Fire Department. They like the Police Department, the Public Works. I appreciate the Selectmen's policy that overrides are for all. We sink or swim together. When one aspect of a town thrives, so do all the others.

Share a moment that reminded you of the ways in which your department's work makes the Town better for the residents? I was fairly new to the job when the micro-burst hit East Arlington. It pretty much devastated a square mile area. Two hundred trees came down. No one had power. And almost immediately, all the relevant departments were on the scene. The Building Inspector was there. The Fire chief was there. The Police Chief was there. The Director of the Department of Public Works was there. Everyone was working smoothly together to marshal their resources. I was profoundly moved to witness a concrete demonstration of how these crucial departments join forces to serve our community. I realized these competent individuals were the people I'd be working with as Town Manager. It was a powerful moment for me to see them functioning in unity to get the impacted part of the town up and running as quickly as possible. And they did it. I didn't cut any trees. They did it. It was a moving example of town government at its best.

When your counterpart from another state asks you about Arlington, how would you describe our community? I would say that Arlington is a close suburb of Boston that has become an increasingly desirable place for people to live for many reasons: the quality of the schools, the proximity to employment, the parks, the restaurants. It's the quality of life, the walkability. Then I would talk about how as a government it is one of the most, if not the most, participatory of the participatory forms of government. We have representative town meeting. We do a number of public forums on all issues over the course of the year. The count on the website is now eighty boards and commissions. I praise Arlington as a welcoming, engaged place that's just packed with interesting people: authors, scientists, entrepreneurs, titans of industry, all the incredible people who live here. I always speak glowingly of the community.

What part of your job brings you the most satisfaction? What do you find most frustrating?The part that gives me the most professional and personal satisfaction is the opportunity to work on the issue of climate change, energy efficiency, and renewable energy. Though that is not core municipal work, it is certainly my personal passion. It was great timing that when I came here in 2010 as the Deputy Town Manager, the town was about to apply to become a green community. The then Town Manager asked, "Why don't you go work on this committee to help them out with this?" And that really triggered for me a sort of a love affair for working on these initiatives. I think we've been able to get a lot done and continue to get a lot done.  We have solar on six schools. That is a real source of personal satisfaction and a driver for me. The frustrating part - and this is probably a personality challenge that I have - is that I have a desire to make everybody happy. I like to keep people happy and satisfied and in a lot of ways that's a good thing because it drives me to higher levels of customer service. But it can also lead me to be frustrated when due to limited staffing or resources, we're not able to provide citizens with what they want. The response to that frustration is to try to find a way to communicate with residents that helps them feel engaged with and cared for even if you're not able, even if you have to tell them to tell them that you're not able to provide something.

The Fiscal Resources Task Group is one of the Vision 2020 volunteer clusters designed to give citizens input into community goals for Arlington. What would you hope to see your department achieve by 2020? The over-arching goal for me is working with the Board of Selectmen, the School Committee, the Finance Committee, and anybody else who wants to be part of it to put together all the information that's going to be necessary to deal with the need for an upcoming operating over-ride and a debt exclusion. Based on the current timelines, that is really going to take the lion's share of the effort and focus coming out of the Town Manager's office over the next two to two and a half years. It will be the ten years since the last override. We also need to help people understand the need for a debt exclusion which would support the bonds or the debt associated with rebuilding the high school. The latter is spread over thirty years, so it's not as immediately big as it sounds. My role is not to advocate for favorable votes but to put information together in a way that helps people understand the issue.

What do you do on your own time - hobbies, favorite family activities, etc? I have two children: a daughter who's about to turn three and a son who is seven months old and nearly all of my time not in town hall is spent with them. I'm at that point in life where my focus is almost entirely on the kids. When I'm not actively involved with my kids, I like running and trying to stay healthy. There is no shortage of places to run in Arlington. There are lots of paths. One of the best parts about being a parent -- other than just the fact of having kids, which is great -- is really starting to build a whole new set of connections in the community with the parents of the other children at daycare. I'm sure that will continue as the kids move through school. I love good food and we're in such a great town for that. The few nights that my wife and I can get out, we can go to any number of wonderful places around town. We can walk to them or take the bus. It's easy to get everywhere.

Finally, is there anything else that you would like to add? Thanks for starting a series that will help the residents by putting a name and a face to the people who provide the town services. Humanizing things helps. When I was younger and heard people say the budget was everything, I thought they only cared about money, but that is not the case. The budget reflects your values. It drives your policy. It's the level of service you want to provide. Where you put your dollars is where your values are. Community values. Personal values. Money makes it possible to do the things we want to do whether it be picking up trash or fixing potholes, striping bike lanes, improving sidewalks for pedestrians, or providing handicapped accessibility. All the matters that matter take money.

~ The Vision 2020 Fiscal Resources Task Group embraces and works to help the Town better realize the following Town goal: "We value Arlington's efficient delivery of public services providing for the common good. The benefits from these services and the responsibility of taxation will be equitably distributed among us. We will be known for our sound fiscal planning and for the thoughtful, open process by which realistic choices are made in our Town." We meet monthly and all are welcome to attend.